During the Spanish era, Mandaluyong was part of the province of Tondo, then Greater Manila during the Japanese occupation, and finally, Metro Manila.

In the separate works of Fathers de Huerta, Perez, and Martin y Morales, they noted that the Archbishop of Manila and the Governor General with the concurrence of the Father Provincial of the Franciscan Order authorized the separatio

n of San Felipe Neri or Mandaluyong and San Juan del Monte with San Felipe Neri as Mother Parish from Sta. Ana de Sapa by virtue of a Decree vice Royal Pastrono; date on September 15 1863. Then on October 30 of that same year, the parish was erected canonically, with Reverend Father Francisco Gimenez, OFM; a 29-year old preacher, as parish priest. He finally took over the parish on December 2 1863. It could be possible that the renovated Casa Tribunal serving as Visita and school for alphabets identified today at F. Roxas corner Castaneda was his temporary parish pending the location of a better site. In 1892, San Juan del Monte was ecclesiastically separated by San Felipe Neri, according to Engineer Artiaga. 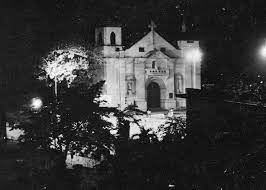 To the missionaries, Mandaluyong was an ancient village. Successes in the series of evangelization in missionary communities were believed due to the protection of San Felipe Neri, as it grew to become a Poblacion or town. In the writer’s inquiry, Fr. Sanches, veteran Franciscan missionary in the Philippines and archivist of Oriental and Iberian record in Spain noted the town’s name followed that of San Felipe Neri, Patron saint of Rome, Italy. In writings it was often referred to as San Felipe Neri de Mandaluyong. Even the vast land area of the Augustinian Fathers of Mandaluyong, San Juan del Monte, Pasig, Marikina and Quezon City was referred to as ‘Hacienda de Mandaloya.’ Due to the popular interest among the natives to present its ancient name, on November 6 1931 Act 36 of the 9th Legislature sponsored by Rep. Pedro Magsalin, 1st District of Rizal Province; San Felipe Neri was changed back to Mandaluyong. 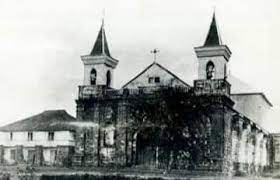 In 1870 or seven years after the authorized separation of San Felipe Neri to Sta. Ana de Sapa, Fr. Gavino Ruiz, the incumbent parish priest was authorized to purchase a new church site from the Augustinian Fathers  for ‘475 pesos con 35 centimos’ about a hectare. Fathers Cavada, Perez and Marin y Morales mentioned that the corner stone of the church was blessed on March 25 1870, under the tide ‘La Purisima Concepcion.’

The purchase of site for the Catholic cemetery was authorized in 1875. Fr. Miguel Lucio, its parish priest, purchased the Cemetery lot from Augustinian Fathers for one hundred sixty pesos only (P160.00). He constructed the surrounding perimeter with adobe walls including the Ermita or Chapel. 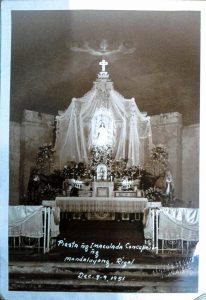 The word ‘Amo 1875’ marker chiseled on adobe on the façade of the Ermita is still legible.

Mandaluyong is an ancient name. Traditional among the town folks, fragmentary as they are claim that the lowland on the west side of Mandaluyong was once the part of the shoreline of the Manila Bay centuries before the era of the Spaniards, gigantic-stormy waved lashed it hills often referred to as ‘salpukan ng alon.’ The word Mandaluyong must have been derived from the Tagalog prefix meaning much, numerous, abounding, of plenty plus the Tagalog root, daluyong meaning surge or crest of giant waves. The combined word should be MANDALUYONG. Etymologically, Spanish writers found it difficult to pronounce the word, hence they Spanized it into Mandaloyon with n. even de Huerta and Perez both Franciscan missionaries refer it as Mandaluyon without g. Missionaries and travelers gave various versions. The most authentic was that of Fr. de Huerta: its undulating and rolling topography or series of alternating plains and ridges appear as waves in the stormy sea. Today, the lowland along the Pasig River and its tidal inlets are inundated during rainy season while brackish water during dry season destroy agricultural crops. Shallow areas of old Poblacion, old and new Zaniga and Hub are underlain with sizeable remains of coral reefs, shells and skeletons of marine life- mute but eloquent testimony that once upon a time Mandaluyong must have risen from the sea.

Father de Huerta wrote that the first Christian from the genecological tree of Lakan Takhan was Martin; son of Calamagin; Calamagin son of Laboy; Laboy son of Palaba; Palaba heir apparent of Lakan Takhan and his beautiful wife Boan.

Establishment of civil authorities preceded the ecclesiastical separation of proposed parish. Years later, the authorities under the Reform Act of 1817 in the colonies under municipal autonomy were headed by Gobernadorcillo with annual election, but in the Maura Act1893 the head was changed to Captain Municipal with bi-annual election. Both local Authorities protect the parish.

1883- Rev. Gregono Azarga took over the parish, according to Fathers Perez and Martin y Morales. He obtained a permit to spend 39 100 pesos for the construction of the church.

1884- Italian white marble slab marker embedded at the front adobe wall façade above the front door of the church indicated a Cross with a hanging cloth in Symbolic M form. At the base of the cross was the inscription, ‘En ano 1884.’ Again at each of the four base corners below the circular railings of the Bodida ceiling were painted. ‘Fundada por Rev. Gregono Azarga’- super imposed by the canvas paintings of the four evangelists. When the canvasses were worn out by the elements, the inscriptions were revealed. Façade wall opening destroyed the marker area to accommodate a balcony during the term of Fr. Guzman.

1894- Captain Municipal Pascual Francisco in his catalampaper hand-written manuscript dated June 22 1894 to the Governor General to the Philippines, reported that San Felipe Neri has a Church, a convent and a rented school house with two teachers and a head teacher, that, it had two rivers, the Estero de San Felipe Neri and Estero de Dawag.

He recorded the town fiesta of the ‘La Purisima Concepcion’ was set on the 8th day of December each year.

Within a period of 8 years Fr. Manuel de Sobrevinas, Gabriel Reyes and Francisco San Diego of the parish were elevated as bishops of the Catholic Church. They were consecrated one after another as Bishops for their meritorious, exceptional and active revival of the faith as well as for the repair, alteration and reconstruction of the Catholic Church and school.

Msgr. Salvador Jose, had constructed the new convent at the right of the church and Auxiliary Chapels at its left side. His incumbency was also credited the expansion of San Felipe Neri Parochial School, which is now administered by the Dominican Sisters; the construction of the Archdiocesan Shrine of Divine at Maysilo St., the Perpetual Adoration Chapel, the columbaria- depository of bones and ashes at the back of the church, the renovation of patio and the construction of Pastoral Center dedicated to the youth of Mandaluyong.