The year was 1621, and the first church built was piquantly small and made of material indigenous to the area, bamboo and nipa. It should be noted that, even at its earliest beginning, his humble house of prayer already functioned as a quasi-parish. It was made o administer all the church sacraments including baptism. The administration of the sacraments were in turn recorded and entered in the canonical books, and the same was, it a much later date, surrendered and entrusted to the parish priest of Quiapo, by the prior of the newly founded church.
During the early Spanish times, there was in the district in Quiapo, a barrio called Calumpang. The place derived its name due to the abundance of such trees thriving the area. Early Hispanic historians described the place as deplorable and unfit for decent human habitation. They noted that it was flood prne, and had very poor sanitary condition despite its being sparsely populated. Bu no withstanding the harshness and despicable condition of the place, when the site was offered to the Augustinian Recollect Fathers, the community, in view of the pressing needs of their missionary endeavor, more than gladly accepted the generosity of their benefactors.
The acceptance of the place was an act of faith rather than act of desperateness on the part of the Fathers. With their eyes transfixed on the Lord, the Friars, under the firm but gentle stewardship of the saintly and scholarly Fr. Rodrigo Moriz Agunderei, remained undaunted and unfazed by the deplorable condition of the site. They wisely chose to see it as the way of God in His Divine wisdom sees it. They imagined that in this place was to rise a house of solace and spiritual retreat for the religious who battered and fatigued by the labors of the ministry.
So the work of faith commenced and the bulk of the problem fell squarely on the shoulders of the fatigable Fr. Aguenderei. Because it was through his efforts that the infant church was brought to life, it naturally followed that he became the first prior of San Sebastian. Fr. Juan dela Concepcion (OAR historian) reports that the newly constructed convent and church were both dedicated to St. Sebastian, due to the founder’s special devotion to his glorious Roman martyr. Hence, the name San Sebastian.
On May 5 1621, occasioned two important events, it not only signaled the opening of the newly constructed San Sebastian Church to the faithful, but in a singular flow of events, the statue of Virgen del Carmen was enshrined in the Church.
Fr. Rodrigo se San Miguel brought the icon to Manila from Mexico in 1618 and was kept at the convent of the Augustinian Recollect in Intramuros. Due to the absence of more propitious sanctuary for the image, the newly built prayer house was chosen to be the permanent house of the Virgin.
While still in its infant stages, this unassuming church of nipa and home of Nuestra Senora del Carmen became one of the forceful bastions of early Marian devotion. Because of the varied graces and special favors granted through the intercession of Our Lady to her devout and pious children, the Marian devotion spread like wildfire throughout colonial Manila.
This Marian explosion saw the birth of the Confradia de del Carmen (Confraternity or Brotherhood of our Lady of Del Carmen). The practice of imposing renowned brown scapular of our Lady was then initiated by the Augustinian Recollect Fathers. The Carmelite Order was not yet established until the middle of the 20th Century.
The parish site, which is now called the very own, was a donation from a rich Spanish couple, the spouses Don Bernandino del Castillo Madonado y Rivera, Maestro de Ocampo of the Royal Infantry Battalion and Commander of Fort Santiago, and his wife Dona Maria Enriquez de Cepedes. They were portrayed by Fr. Andres Del Espiritu Santo as, “Illustrious not only from their lineage but much more for the spirit and fervor with which they devoted themselves to God’s service, including their numerous properties and estates bestowed on them by God, as they were exceptionally affluent.”
A special mention of the character of the donors is made not without any special purpose. At its best, the founding of the first San Sebastian Church already exhibited that formidable spirit of a church which symbolizes the solidarity between God and those who wished to follow the Lord in His ways. 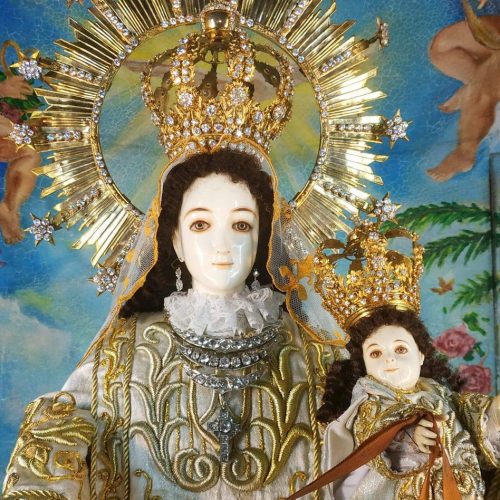 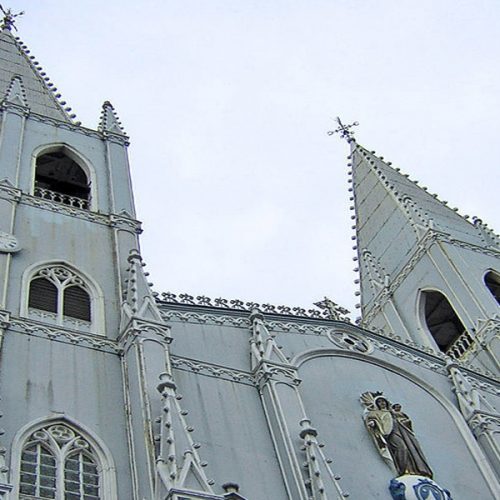