The Franciscans started to stay in Sampaloc in 1613 with the construction of a convent to be used as a novitiate. Due to the unsanitary conditions of the house in San Francisco del Monte for a time, Fr. Blas de la Madre de Dios, Provincial of the Franciscan Order, decided to transfer the novitiate to Sampaloc. The novitiate was in this site in the period 1614-1619. The site was donated by the pious “Madre del Campo”, Don Pedro de Chavez and his wife Dona Ana de Vera who at the same financed the construction of the Church and convent.

Before it became a parish, it was part of Sta. Ana. The first parish priest in sampaloc was Fr. Augustin de Tordecillas, one of the 15 religious members of the Franciscan Order who arrived in Manila. It was dedicated to the Blessed Virgin Mary under her title Our Lady of Loreto in the year 1616. The holy image of Our Lady of Loreto was enshrined at the main altar of the church. It is believed that the image was brought here by the Spanish Franciscan priests when they came to the island from Europe.

In 1639, the Chinese made an uprising against the governor and set fire to the church and convent. The following year, Fr. Andres de Puertoliano had it rebuilt. In 1666, Fr. Francisco de Santa Catalina found the church in such bad condition that he had it reconstructed and enlarged. It was made a vacation house for Franciscans from the province.

Several years later, in 1692, the parish acquired one of the earliest printing presses in the country. The use of the printing press mad a humble contribution to the cultural development of the Philippines for a century. However in 1808, the printing press was sold to the Venerable Orden Tercera (VOT), the Third Order of Penitence.

In 1783, the Franciscans transferred the center of the Third Order in Sampaloc. In 1794, the Franciscans allowed the tertiaries to build the chapel on their land next to their church. This chapel was named under the patronage of Nuestra Senora de Peregrina. The earthquake of July 1880 caused the destruction of the church, the convent and the VOT chapel. Fr. Pedro Flores started the church’s initial repairs. But it was not until 1888 that the construction of the building was finished under the supervision of Fr. Ramon Cervices. Two years later, Fr. Cervices undertook the construction of a cemetery and chapel on the left of the church. It did not take long, however, before they were demolished and transferred to La Loma. A portion of the old graveyard is now the extension of San Antonio and Bustillos Streets.

Fr. Cervices was the last Franciscan parish priest, for in 1896 during the revolution he went to live in San Francisco del Monte. Fr. Marino Martinis, in his work, ‘Filipinos y la Venerable Ordain Terrier, 1887,’ described extensively the churches in Sampaloc and Intramuros, he wrote:

“There are two churches in the city of Manila for the use of the Third Order of Penance: one is in Intramuros within the existing compound of the Convento de San Francisco, and the other one is in the suburbs of Sampaloc, side by side and attached to the parish and convent, where always the parish priest is a Franciscan and at the same time Commissary to the Third Order. The church of the VOT de Sampaloc was practically ruined by the effects of the strong earthquake of 1880. Fr. Pedro Flores, the incumbent commissary started the reconstruction work… Fr. Ramon Caviedes who succeeded Fr. Flores as commissary was the one who did most of the reconstruction work.”

The major achievements done by Fr. Caviedes in 1890 included a ‘panteon’ of funeral parlor and housing facilities for the secular priest visiting Manila.

At the height of the Philippine revolution, the friars left Sampaloc and took refuge in Intramuros. In most of the cases, churches were abandoned or left under the care of Filipino priests if there were any available in the place. In Sampaloc, a Filipino secular priest took over the parish during the revolution days.

After the revolution the friars did not claim back the parish of Sampaloc. It was absolutely impossible since most of the friars were repatriated and the few ones left behind were till under the shock of the confusion created by the revolution and the war with America. They did not know what to do.

Sampaloc was administered by a secular priest under the responsibility of the Archbishop of Manila. But it was not the case with the existing church and facilities administered by the Commissary for the Tertiaries. That part never was given up or allowed anybody to take possession for their own.

In 1907 there was a legal dispute which reached the court about the ownership of the land known as VOT’s portion in Sampaloc. The heirs of a certain Albino Goyenechea represented by Ramon Soltero and the parish priests of Sampaloc, Fr. Francisco Ortiz, a secular priest, claimed at the same time by the ownership of the land held and used by Franciscans represented by Fr. Caviedes. On April 27 1909, the decision of the ‘Tribunal del Registro de Propiedad’ was rendered in favor of the Franciscans represented by Fr. Caviedes. The heirs of Goyenechea and the parish of Sampaloc dropped their respective claims.

The historical crisis of personnel did not interrupt the Franciscan presence. The canonical erection of the regular religious house of th Franciscans, called ‘VOT de Sampaloc’, was approved with the Apostolic Rescript  dated on February 9 1915.

It will be good to recall that in the case of Sampaloc the Commissary of the VOT was at the same time the parish priest and the local superior. This was the usual way how things went up to the time when the parish was given up to the Archdiocese of Manila. Thereafter, the Commissary continued heading the VOT as well as holding the office of the local superior for all effects. This was done, even during the years when due to lack of personnel the Commissary was practically done or with only one companion.

Towards the end of the Second World War, the Franciscan house and the Third Order of Church in Sampaloc as well as many other buildings in Manila were totally destroyed. As the popular devotion to St. Anthony de Padua disappeared in the Franciscan Church in Intramuros, which was also totally destroyed during the war together with the famous and popularity venerated statue of the saint. Fr. Mariano Montero thought of transferring this devotion from Inramuros to Sampaloc. With this in mind, he brought from the Sta. Ana Church the statue of St. Anthony of Padua to a temporary altar of the Sampaloc Church ruins which rebuilding was about to begin. People and devotees started to increase in surprising proportion. Since then Fr. Montero, author the hymns sung at the beginning and end of the novena masses on Tuesday, named this Church “Shrine of St. Anthony”. The reconstruction of the church and residence of the fathers was finished and rededicated to St. Anthony of Padua in the later part of 1947 by the Most Reverend Rufino Santos D.D, Archbishop of Manila.

Fr. Victorino Caballero (1957-1966) in October 1965 began constructing the building beside the church. This was named St. Francis Guest House. The intention of Fr. Caballero from the building was to use the first floor as a clinic for the poor and part of it was to be destined for niches and keep the ‘restos’ bones of deceased friars, tertiaries and distinguished benefactors. The second, third and fourth floors were to serve as ‘hospederia’ or guest rooms for poor secular priests and tertiaries from the provinces on transient basis.

From 1970 to 1979, the place was the seat if the vicarial headquarters during the office as vicar of Fr. Silvestre Murillo. Then the Cursillistas vacated the place, the 1st office and 2nd floors were used by the SFO’s while the 3rd and 4th floors by the friars and the formants, since it was at that time one of the aspirancy houses of the Franciscan.

In 1989, when Fr. Suela was assigned rector of this place, he set up the Vocation Affirmation Program. In 1992, when Fr. Ante (provincial mission animator and FMU director) was assigned, the FMU office was transferred from the Provincial House (SFDM, Quezon City) to this place. Meanwhile, the office of the national spiritual assistant to the Secular Franciscan Order, occupied by Fr. Agapito Diez, remains to this day in this shrine.

The Two Churches in Bustillos

From history, the parish of Loreto was administered by the OFM Franciscans since 1580. Because of the Philippine revolution, the priests transferred to Intramuros and let the Secular Clergy of Manila take over it. After the Second World War, when the Franciscan Convent and church in Intramuros was destroyed, the OFM Franciscans decided to rebuild their land in Sampaloc to house the Third Order and a chapel where the image of St. Anthony of Padua can be temporarily enshrined. Surprisingly, it was here in the small chapel the devotion grew by the thousands with pilgrims coming from all over the country.

The basic difference between the two churches is that St. Anthony is a Srine whil the Our Lady of Loreto is the Parish. As a shrine, our sacramental services are limited to Masses and Confessions. Burials, weddings and the Sacrament of Baptism are not held here. Requests like house blessings, sick calls, and other sacramental services must be sought from the parish. The shrine can accept them only if ensured a clearance from the parish. The shrine’s ecclesiastical jurisdiction is transparochial in nature. Its geographical territory is just a complex as bounded by the walls of the Shrine. 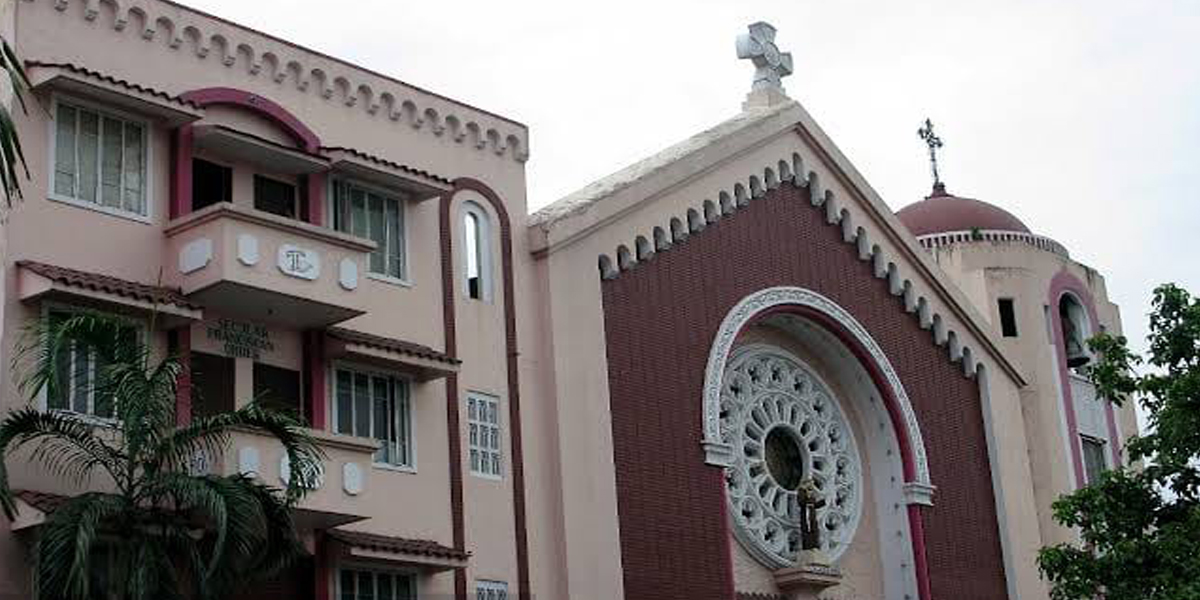 A Christ-centered community of peace, justice, integrity of creation and fullness of life.